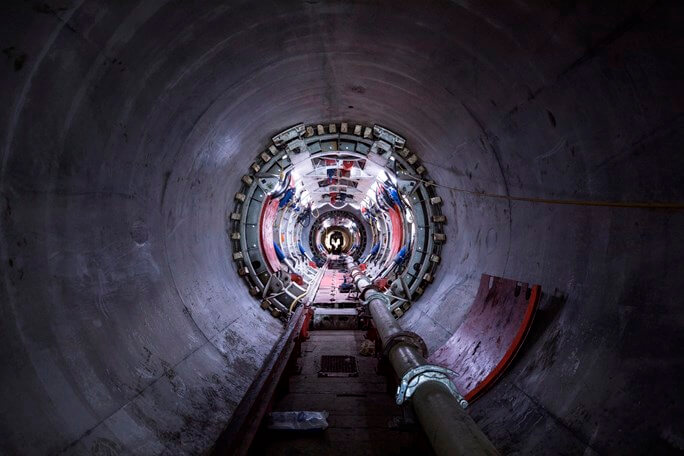 The connection tunnel between Wandsworth and the main super sewer in West London with 1.1km length, has finished its secondary lining phase and this is a landmark moment for the Tideway project.

The Frogmore Connection Tunnel (FCT) crosses from the northern angle of King George’s Park, through Tideway’s site at Dormay Street, under the Thames and finishes deep beneath the northern bank of the Thames at Carnwath Road in Fulham.

Due to working with expert tunneling firm Kern, the team used a system of four individual ‘shutters’ to cast the concrete in situ using a ‘hit and miss’ sequence making the production procedure run faster. Following a month into the secondary lining production, the UK’s obligatory lockdown forced the team to halt all work.

Considering the 2.5m internal diameter of the FCT, social distancing was a significant challenge, and resuming the production in accordance with the latest guidance needed much effort, which has been done thanks to Tideway’s main works contractors (Bam Nuttall, Morgan Sindall and Balfour Beatty), along with the efforts of Kern.

As it is illustrated in the graphic below, a tunnel boring machine called Charlotte had previously dug the full FCT in two separate drives – first mining south from Dormay Street to King George’s Park, then (after a short journey by road back to Dormay Street) north to Carnwath Road. Project Director Sally Cox stated: “Well done to the entire team for completing the secondary lining of the Frogmore Tunnel. It has not been an easy one with the disruption of Covid in the middle of the works, but the team has worked brilliantly in making it a success.”

While the maximum production rate of this team was 72m, the total use of concrete for the secondary lining in this project was 1,420m3 and covered an average of 60m per week.

Currently scouring both the northern and southern tunnels and completing the contact grouting and fixing any outstanding snagging items, is the next step of this process.