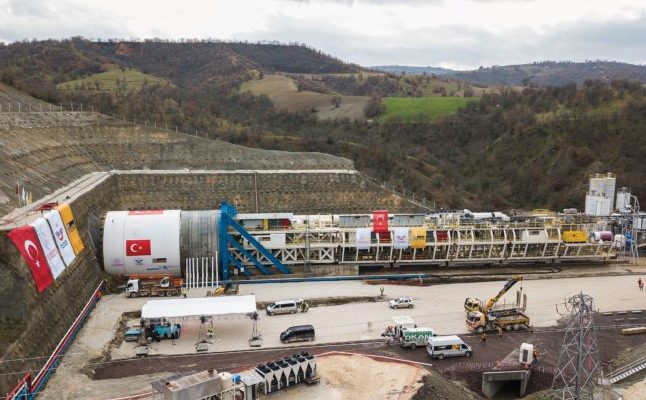 The Crossover XRE type TBM, with a diameter of roughly 14 meters, will bore the 3.5-kilometer Eşme-Salihli railway tunnel for Turkish State Railways as part of the Ankara-Izmir high-speed train project.

The TBM will bore through sandstone, gravel, claystone, and siltstone, among other ground conditions.

During the tunneling, Kolin Construction anticipates encountering some groundwater and unstable rock.

After more than seven years in storage and updates to its systems to ensure it matched the most recent safety and efficiency requirements, the TBM was finally deployed.

The wide diameter design allows both a screw conveyor and a belt conveyor to stay in place, allowing for quick transitions between EPB and hard rock modes.

In EPB mode, the screw conveyor works like any other EPB machine. The screw features a replaceable inner liner and replaceable carbide wear for abrasion protection.

Knife pieces are connected to a mixed ground cutterhead, which may be swapped out for disc cutters in tougher circumstances.

A man lock for cutterhead inspection and modifications, as well as mixing bars inside the mixing chamber, are included in the machine design.

The mixing bars and first part of the screw conveyor can be retracted to switch to hard rock mode.

To allow the muck to fall down the muck chute, muck paddles are fitted in the cutterhead.

A hydraulic muck ring permits a chute linked to the bulkhead to move forward and down at a diagonal angle, allowing rock chips to be deposited in the chute and then transferred to the TBM belt conveyor through the screw conveyor.

The Robbins torque-shift system has also been utilized. The system is a two-speed gearbox that enables efficient tunneling in hard, mixed, or soft ground.

Yunus Alpagut, general manager of ATES, Robbins’ Turkish affiliate, said, “I am really glad that the TBM has been introduced.”

The machine has already drilled over 500m through gneiss and mudstone.

This is a chance for Robbins to demonstrate that huge diameter TBMs can drill in such tunnels, even in geology that is complicated and ground conditions that are tough.

“Recently, there have been large diameter, non-Robbins machines that have failed at projects such as the high-speed railway in Bilecik, so this is very important to show the Turkish tunneling industry that large machines are up to the challenge.”

The double-track railway line will welcome passengers at max speeds of 250 km/h, taking three and a half hours to go between Eşme and Salihli.