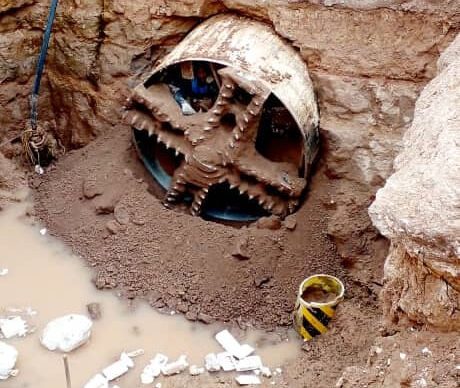 18 November, 2021 / 0 Comments The completion of Micro-Tunneling Project of Robat Karim by ASM 2200 Machine

The ASM 2200 MTBM Machine made by Tunnel Saz Machine, is done successfully with its career of sewage line to connect the Robat Karim urban sewage to Nasir-Shahr Treatment Plant, located at suburban area of Robat Karim City in Tehran Province.

The None-Slurry machine, capable of excavation in grounds with uniaxial strength up to 30 Mpa, having a 2200 mm cutterhead in diameter, laying 1800 mm concrete pipelines which were tailor-made according to the employee requirements and particular geological conditions of Ribat Karim. With regard to its being None-Slurry, the machine owns conveyor belt and muck car system to handle and convey the excavation wastes outside the tunnel, completed its drive with no occurrence of subsidence or diversion.

As compared with traditional ways of micro-tunneling which are labor-intensive, the machine as a full-face mode one, gives a notable output and performs with allowances within mm, rendering the machine appropriate choice for employees and contractors. The TSM is about to cut down the costs of tunneling by introducing such tailor-made machines as ASM 2200, capable of meeting the same excavation standards as slurry excavation and bridging the sensible gap between traditional and mechanized methods.

Today, owing to the drought and water shortage, the need for treating and recycling sewers has triggered. due to this need, the construction of wastewater treatment plants out of urban areas is on the rise, accordingly, to reuse the treated sewage in irrigation as well as farming purposes. Most of the sewage conveyance lines are compulsorily running under surface and subsurface urban structures, namely highways, expressways, railways, etc. the terminal sewage lines, receive the sewer flow from subsidiary lines to pass the collected flow with increased volume to the treatment plant areas, playing a decisive role in completion as well as the exploitation of sewage networks with the hope that owing to widespread use of mechanized excavation, not only the number of lines but also the number of unattached scattered sewage lines are decreased remarkably. With regard to the considerable diameter of the collector lines, the safest and best way to pass the collected flow to treatment plants is considered micro-tunneling with the peculiar technic of pipe-jacking by MTBM’s.