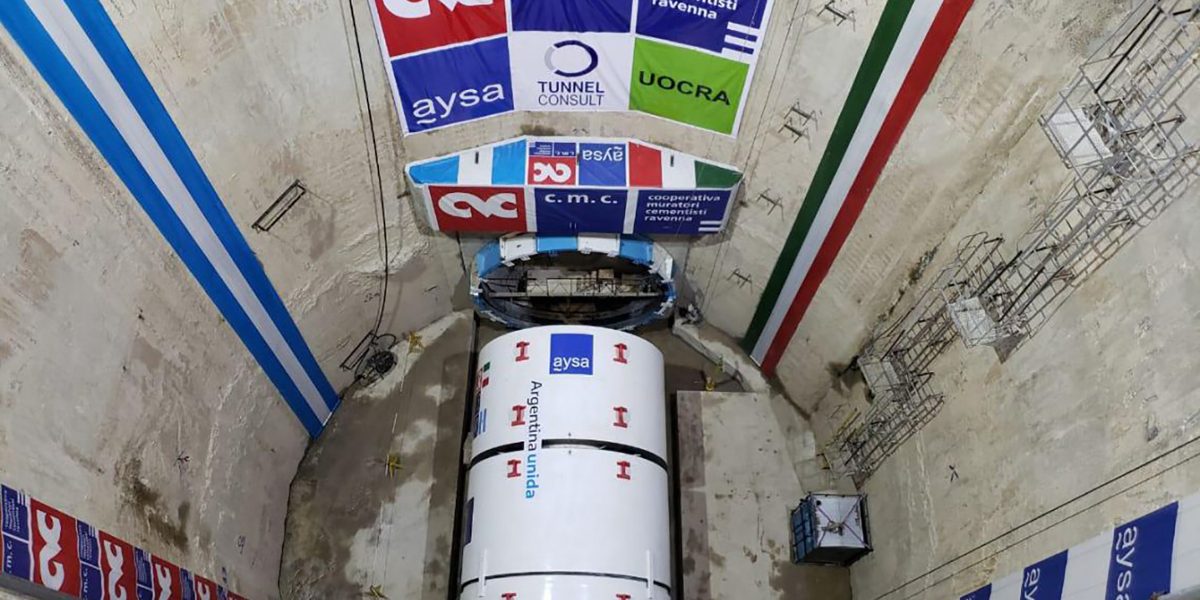 12 March, 2021 / 0 Comments The TBM Drive For The Agua Sur Tunnel Has Been Started By CMC Di Ravenna

Terratec has announced that the 4.66m diameter EPBM ‘Eva’ has passed its site acceptance test and is currently being driven on the 13.5km long Ro Subterráneo a Lomas tunnel in Buenos Aires, Argentina, by Italian tunnel contractor CMC di Ravenna.

The tunnel research is important because it is Argentina’s most significant water infrastructure project in the last 40 years. As the central component of the Agua Sur system. The new system will provide freshwater to 2.5 million people living in Buenos Aires’ southern metropolitan area.

The tunnel will be driven by two Terratec EPBMs. Both machines, with a diameter of 4.66 meters, are designed to handle the varying geology encountered along the project’s path. TBM’s high-torque soft ground cutterheads have a spoke type configuration with a 49 percent opening ratio and cutting equipment made up of fixed and back-loading knife bits to ensure fast progress and limited interventions.

Each TBM cutter head is powered by eight hydraulic motors totaling 792kW. The two boring machines must be launched and received from shafts as part of the project. The tunnel will be mined at an average depth of 25 meters, using precast segments with an outer diameter of 4.4 meters and an inner diameter of 3.9 meters, and will follow an essentially straight alignment to a maximum slope of 0.25 percent.

The first launch shaft is made up of four circular sectors that are connected in the bottom region. The shaft is approximately 45 meters long, 12 meters wide, and 25 meters in length.

“The fact the machines are launched from a shaft has required us to make full use of a modular design and umbilical launching system to work in the confined space, this is why a hydraulic drive solution was chosen” elaborated Emilio Saraniero, TERRATEC Project Manager.

The new Agua Sur Scheme consists of a raw water intake, an extension of the General Belgrano Water Treatment Plant (which will raise water processing capacity from 1,950,000m3 per day to 2,950,000m3 per day), a 23-kilometer water conveyance tunnel (built in two stages), two pump stations, and 46-kilometer pipe connections. The entire project is scheduled to take about 10 years to complete and be implemented.

SRL is Going to be Built by Three Consortia which was Shortlisted 13 September, 2022